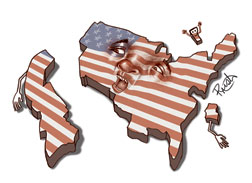 Seceding or at least talking about seceding its the best way to pry power out of our out-of-control central government!  We don’t have to fully secede and break the States apart but the proposition of it will help to take power from our overzealous federal government and give it back to the States which, is how the founding fathers intended this great country to be.

American politics didn’t just happen, it was carefully designed by our founding fathers and these guys foresaw the dangers of having a powerful central government aka federal government. This is why they made several laws to keep the central government in check. It was always clear that the States should have the power to govern themselves that way the power is divided evenly which, will prevent any government entity from getting so powerful that they can unjustly dictate our lives. In fact, its was written into our constitution that the federal government is not even allowed to have armed forces but now we have hundreds of thousands of armed federal officers and agents whose jurisdiction spans coast to coast and overrides the power of the States. The founding fathers knew that government power must be small and localized or it will inevitably get out of hand as it has now.